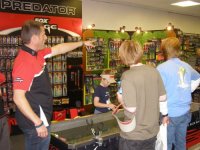 On October 1st 2011 the PAC Annual Convention returned to Kettering for the third, and perhaps final, time. The number of speakers for 2011 was reduced from the usual four down to three. Was this a brave move by the current committee and conference organiser Colin Goodge? Would fewer headline names have an impact on the numbers of pikers willing to make the trip? If anyone was sweating on the turnout they needn’t worry. It was all smiles as numbers appeared to be considerably up.

The trading hall bustled with bargain hunters seeking out books, tackle, lures and even cuddly toys from the plethora of traders. Familiar names such as Fox International, Eddie Turner and David Miller Art were joined by emerging names like Chico’s Lures and DGFishing and Karen Sarkar Art. 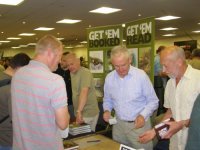 Books on pike fishing were once thin on the ground. No convention these days seems complete without a book launch or two. Mick Brown Professional Pike Angler and Graham Booth A History of Pike Fishing Volume 1 were on hand to chat, sign and sell copies of their new books. Mick even sold out of the copies of he’d brought with him.

The boost to book sales given by attending the convention must be well worth the effort. I can’t imagine anywhere better to launch and promote new pike books, paintings, sladles, and other products than at this busy annual event. Surely there is nowhere else that sees so many pikers in the same place on the same day. 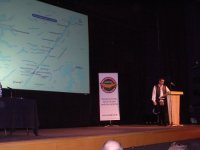 The excellent lecture theatre hosted slide shows by Dave Horton, Micky Jones and Stephen Harper. Dave ran through his astonishing list of personal highlights with more than a little humour thrown in. Wearing full highland dress, Micky showed what can be achieved in the Scottish highlands with large doses of dedication and optimism. Unfortunately I didn’t get to see Stephen’s show.

A most welcome new feature for 2011 were the Junior Teach-in sessions organised and hosted by Eric Edwards with support from Mick Brown, Julian Chidgey and Micky Jones, amongst others. Surely this type of event is long overdue at the convention. The next generation of pike anglers will need to carry the torch for pike preservation and welfare.