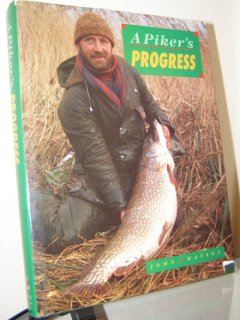 A Piker’s Progress, one of the most celebrated pike fishing books, is John Watson’s own story of his obsession with angling. Dedicated, passionate and controversial, John uncovers the truth behind his battles with authority, his strong beliefs, forged through years of pursuing pike in every conceivable way, and his angling methods, some of which stretch the boundaries of legitimacy beyond those of the less determined angler.

John’s stories will entertain and enthral readers who will find it difficult to put this book down.

The story begins with a hugely enthusiastic budding specimen hunter struggling to fulfil his destiny. The young John is hampered by the lack of opportunities offered in his native Blackpool. However, he does not let this handicap restrict him in any way.

This determination to succeed stretched to walking six miles to fish a pond and getting picked up by the police along the way.v

Despite the transport difficulties of the 1960’s and 1970’s John embarks on pike fishing campaigns in the Fens, Scotland, Ireland and ultimately moves to the Norfolk Broads in order to further his specimen hunting obsession.

As a stand out piece of work among pike angling literature, this is one of the most sought after books around, with copies rarely coming onto the market and prices consistently high.

If you own a copy of A Pikers Progress you will want to keep it, if you don’t, you should try to get hold of one.

The original book, A Pikers Progress, was published in 1991 and, to my knowledge, was only printed in hardback. John Watson updated the book with the release in 2009 of A Pikers Progression.

A Pikers Progression takes the first book and brings Johns story bang up to date with six new chapters and a new, fresh, colourful design. This quality hardback should grace the bookcases of a new generation of anglers who will find the story just as enthralling as previous generations did.