In this edition of Ask Pike Angler we look at the different ways to attach a dead bait to a standard trace. The question came in from Dave Wilkins who asked:

What is the correct way to hook dead baits on snap tackle? Do you have the head facing up the line so the tail is hooked on the last treble or vice versa?

Thank you for the question Dave. I use three different methods for mounting dead baits. Each one is used in a specific piking situation. First let us consider a few factors that affect how you should mount the bait.

Pike have lots of small teeth that are used to grip the prey. They cannot take a bite out the fish.

When a pike takes a fish it will either attack at speed or approach with stealth and suck in the bait. It will then turn the bait head first before swallowing it whole. They can do all of this very quickly, which is why you should not wait to strike a run.

Fishing with the hooks in the wrong place and waiting too long to strike is a potentially lethal combination because a treble can stitch up the soft flesh at the top of the pikes throat. That’s what makes this a great question.

First of all lets have a reminder of what snap tackle is. Standard snap tackle rigs for pike are two treble (or double) hooks about 4 inches apart mounted on an 18 to 24 inch long wire trace.

Although I use Partridge Double Hooks in my normal dead bait set up, I have used trebles a lot in the past and still use them now and again. The trebles are semi-barbed with the barbed hook used to securely hook the bait. 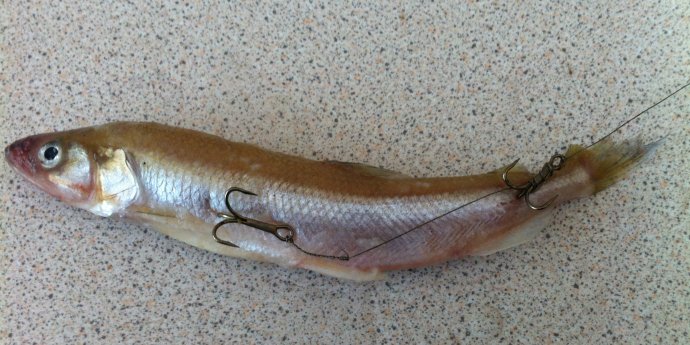 I use the first method when ledgering or float ledgering a dead bait on a lake or other still water. Attach the top treble through the tail root and the bottom treble in the flank. The bait can be fished in this way either on the bottom or popped up off the bottom. Here is an article on how to pop up a dead bait

To help reduce the risk of deep hooking, don’t have the trebles so far apart on your rig that the bottom treble is in the head.

Ledgered dead bait on a river 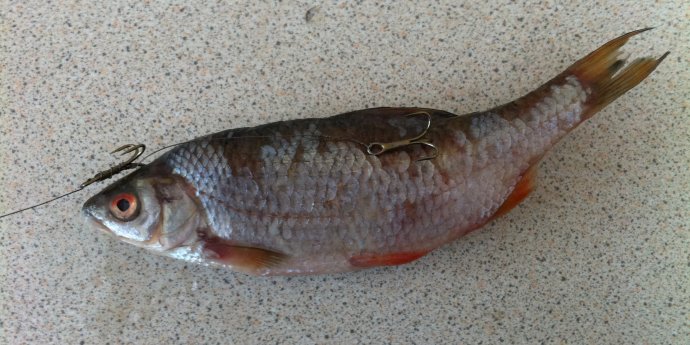 When pike fishing on rivers the bait could be attached using the same method as for ledgering on a still water and that would be totally fine. I prefer to take a different approach because the flowing water will affect the way the dead bait lays in the flow.

The bait will be laying down stream from the lead, so I mount the bait the opposite way, with the head of the bait looking up the trace. I feel this is a more natural presentation and the bait may even flutter in the flow.

My suspicion is that in the majority of cases a pike will approach the bait from down stream. These predators like to stalk and surprise their prey. A bait, even a dead one, that is staring at them may cause the pike to think twice. It might be a crazy idea but I want to stack the odds in my favour.

Another reason for mounting the dead bait head up is that the bottom treble will be further away from the pike’s gut when it enters the mouth. I feel this is a safer method for this style of piking where takes can be quick. Always strike immediately when fishing rivers. 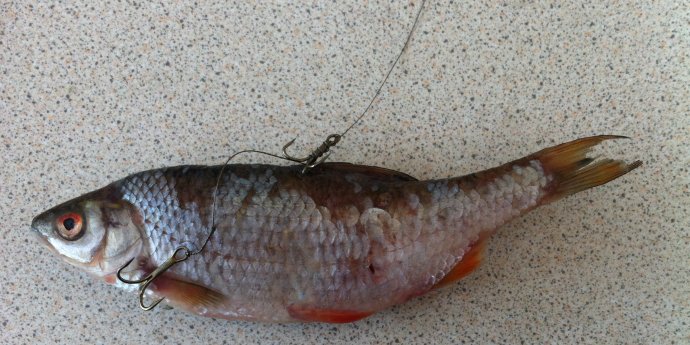 The third method is used when fishing a dead bait suspended mid water beneath a pike float. In this case I want the bait to be as close to horizontal as I can get it so it looks just like a daydreaming fish

The pike will usually attack at speed from below so you should use a longer trace or an up trace with this method to prevent a bite off.

Takes will be quick and the float often disappears immediately as the pike takes the prey back to the deeper water. The trebles are in the middle of the bait so you should hook the pike if you strike straight away.

Thanks for the question Dave. I hope this has given you a few ideas for your piking.