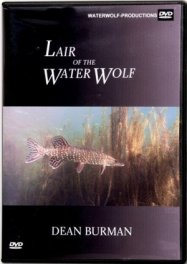 Lair of the Waterwolf is an enthralling underwater film of pike in their natural habitat. Dean Burman is a diver and professional film maker who captured the intriguing footage at Stoney Cove, the National Diving Centre in Leicestershire.

The freshwaters of the British Isles have long been the target of those who choose to angle a line.

Staring longingly onto the glassy surface, the angler waits patiently for a fish to make a mistake. Time passes and minds wander.

Who hasn’t imagined a magnificent pike slowly moving amongst the weeds, pausing only to suck in the partly frozen mackerel tail then moving away with a purpose that drags the float out of view?

Powerful yet mysterious, Esox Lucius, the Northern Pike, is a creature from a world hidden from the prying eyes of humans.

Just like newspapers bring us celebrities, so the nature programmes concentrate on glamorous species of wildlife. Lions and Tigers, Sharks and Whales are quite rightly and expertly filmed. All the while the freshwater fish in our lakes and rivers tend to be overlooked and therefore remain mysterious.

Lair of the Waterwolf is a brief glimpse into that underwater world and the habits of Pike. The footage shows pike in their natural habitat, at times interacting with one another, and then barely tolerating each other.

When some of the footage was used by Alan Titchmarsh in a recent television series Dean was prompted into producing this DVD containing 27 minutes of footage with a commentary written and narrated by Dean. A short additional feature explains how and where Dean made the film.

As a pike angler I revelled in gaining an up close and personal view of the pike. Coarse lakes often appear very murky however Dean captures the grace and elegance of Esox Lucius with a remarkable quality and clarity. The target for the next instalment should be to film the pike taking a deadbait (Well I can wish).

Pike anglers will certainly be enthralled at watching the pike in this production and should hope for more from Dean in the future.

To find out more about the Lair of the Waterwolf DVD and Dean Burman or to order a copy visit the website.