A couple of hours down the motorway and I was queuing outside the conference hall at Stoneleigh Park, the National Agricultural Centre near Coventry.

Doors opened at 9a.m. for my first Pike Anglers Club conference since the 1992 event at the American Adventure theme park, memorable for those of us from Doncaster as our own Bob Hopwood was honoured with the Pike Angler of the Year title.

A tour round the various trade stalls left me wandering if I had stumbled accross a gathering of the Plastics Appreciation Corporation. There were lures of all shapes, sizes, colours and styles adorning most of the stalls.

Are lures the future of pike angling? Deadbaiting is my preferred method but am I out of touch with the modern scene? Well, possibly, but then again I don’t see too many lure anglers on the bank. There are plenty who sit behind a pair of rods all day though.

I considered the question for a moment longer before rational thought took over. Lures are easy to package, they don’t get damaged in transit, and are quite eye-catching when displayed at tackle shows.

How many anglers’ tackle bags are littered with nearly new lures that looked great on the stand? Lures are relatively cheap, their purchase can be covered by disposable income and small change, I bet the traders love conventions.

The P.A.C. were hoping the line-up of guest speakers would attract a bumper crowd for the event billed as the 30th anniversary bash.

Judging by the number of pike anglers who crowded the hall for the first speaker, Jason Davis, they were surely delighted at the turn out.

I arrived five minutes after Jason had begun and I could not get in to the auditorium. From my position, peering through the open doors at the back of the room, I could see enough to guage the audience’s response to Jason’s captures.

A brace of pike over 35lb each is a dream to 99.9% of pike anglers. A once in lifetime achievement for the rest. Jason did this four times! In one week!

Gasps went around the hall when the first picture of these truly massive creatures flicked onto the big screen.

At 42 inches long and 29 inches around the girth, the unhooking mat was barely visible beneath this fat pike. The audience were captivated by picture after picture and tale after tale of mammoth pike.

It was impossible not to be blown away by what Neville Fickling later described as a capture that will be recognised in years to come as a hugely significant and unique achievement in the history of pike angling.

John Watson’s desire to keep a low profile on his return to the P.A.C. was scuppered by the committee who talked him into giving an enlightening insight into the way pike angling has progressed throughout the last 40 years.

John highlighted some of the inadequacies in the tackle of yesteryear and educated the audience in some of the ways they sought to overcome them. John will surely see the irony between the slide showing a broken, home made landing net and his battle with the projector.

Minds were focused with a parting thought from Watto designed to keep it all in perspective, “Pike eat fish!”, and who can argue with that?

I watched Mick Brown’s slick performance on the TV feed in the tackle hall as I couldn’t get near the packed auditorium.

Starting with a montage of pictures set to a backing track, Mick eased through his slides with the grace of a swan. I particularly liked Mick’s use of comments on the slides, which helped to fill in the gaps when I was straining to hear the TV feed. I am sure they provided Mick with a subtle aid memoir too. 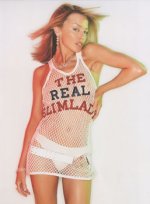 We all learned a little more about boats with an entertaining Eddie Turner.

A sprinkling of jokes and the odd rogue slide created a light hearted atmosphere and added to the descriptions. I can’t look at my Kylie calanders without thinking of weed.

The show reminded me of cold winter evenings in smokey pubs with an old slide projector and Phil King showing his latest girlfiend. I haven’t been to one of those evenings for a few years but I imagine they still occur – only technology and availability of material and has improved. Oh, and the smoke will have blown away.

The last time I went autograph hunting Brighton were holding Manchester United in the F.A. Cup Final and Seve Ballesteros was battling with Nick Faldo at the Car Care Plan International in York.

So, with a copy of P.A.C.30 tucked under my arm, I watched on while others had their books signed.

I’m afraid I cannot put names to faces with enough certainty to ask for autographs.

John Roberts was one face I recognised but I didn’t have a clue who he was talking to, although he looked important. How relieved did I feel when I settled down to watch Colin Goodge, P.A.C. Chairman and contributor to the book, when I realised he was JR’s mystery friend.

Colin gave a sparse audience a potted history of the history of the P.A.C. When the room started to fill towards the end of his thirty minutes he was perceptive enough to realise that E.T. was on next. Which, contrary to one angler who wrote to Pike and Predators demanding younger, newer speakers, shows that the record audience of 500 had come to see the big names, even if they are all over fifty years old.

Make a date in your diary for 22nd September 2012 and take a trip to North Yorkshire. You’ll be glad you did.

Find details of the PAC Convention 2012 on the PAC website