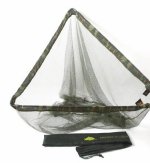 The first item you will need for unhooking a pike is a suitable landing net. After all, you have to get the pike out of the water and onto the bank. Or do you?

Pike anglers who are experienced in holding and unhooking pike might find occasions where a landing net is not required. But that does not mean they don’t own or use a landing net for the majority of their angling. There are situations where a pike can be unhooked in the water, for example, when fishing from a boat. This is not the usual case so you will need a landing net.

Specimen Landing Nets of the type used by a large number of pike and carp anglers are triangular and at least 36 inches (80cm) but more likely 42 inches (90cm) wide.

You will also need a Landing Net Handle for your net.

Round nets of at least 30 inches diameter are also becoming popular, especially for the mobile angler. Round nets are easier to carry through bankside vegetation. 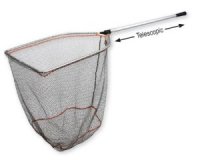 A recent development in nets is the addition of a rubber coating on the mesh. They have some advantages over the material versions such as:

It would be interesting to know if they are less likely to carry the water borne diseases that commonly affect fish and fisheries.

My view is that rubber nets like the Savage Gear Telescopic Folding Rubber Landing Net will only get more popular as tackle manufacturers, anglers, and fishery owners catch on to them.

An unhooking mat is vital to pike welfare and should always be used to protect the fish on the bank.

Pike, like any fish, can be easily damaged by rough ground. Always cover the mat in water before putting the fish onto it. Dry mats and towels will remove the mucus that protects fish from disease. Rough ground will remove scales and cause abrasions. Sharp grass can pierce the pike’s eye, causing blindness.

There is a wide range of Unhooking Mats on the market and the great thing is you can get an excellent mat for less than a tenner. Some of the mats with zips and carry handles that double up as a weigh sling, such as the Koala Unhooking Mat and Sling are great value for money at around fifteen pounds.

You really can’t do enough to protect the fish when it is out of the water.

A pair of forceps are absolutely essential for unhooking pike and you should not go piking without them.

I used the the same pair of 8 inch straight forceps to unhook my pike for twenty years. At around five pounds a pair that is great value for money from a cheap item. The grips are now well worn, so when I invested in a raffle ticket that came out the draw at a PAC meeting I was delighted to pick up a new pair of eight inch curved forceps. I also carry a pair of 12 inch forceps as a back up just in case I catch something with a bigger mouth.

The 8 inch Forceps are also handy for twisting 20lb trace wire. The 12 inch pair are better for twisting thicker wires.

Like it or not, treble hooks can be difficult to remove, either from the pike’s mouth, the landing net, or your own flesh. Once a treble hook is embedded, the simplest and safest way of removing it could be to snip off the points.

A hook with all three points in the pike’s scissors, or the fleshy part of the throat, is hard to turn over and remove without damaging the flesh. Cutting the treble can be the most humane way of removing the hook.

Barbless trebles will be much easier to remove, but most anglers use semi-barbless or barbed hooks with two of the barbs crushed. In my experience a crushed barb can be as hard to remove from a pike as a barbed point if it is firmly stuck.

I recently had the barbed point of a size 6 treble firmly embedded in a finger. Believe me, it was stuck solid and I had to pull very hard to get it out.

Forceps will remove treble hooks from the mouth of a pike in almost every situation. Just occasionally you might need something with a firmer grip to remove the most stubborn treble.

In this case you might benefit from a having a pair of pliers handy. I keep a pair of Pliers in my lure fishing bag as the hard lures can get lodged in the pike’s mouth.

There was a time when the majority of anglers weighed their fish with Dial Scales such as those by Avon and Reuben Heaton. For many years Avons were possibly the most popular scales with 32lb and 40lb models weighing in 1oz increments. Sadly the Avons are no longer produced, although second hand models do appear on ebay and still represent good value. Rueben Heaton Specimen Hunter dial scales weigh up to 60Lb in 2oz divisions and cost upwards of £90. The Reuben Heaton Flyweight MK2 Scales which measure up to 40lb in 1oz divisions and have a £30 price tag.

Take care when reading the weight with Dial scales. Once around the dial on the Avons is ten pounds, twice around is twenty pounds etc.

I watched a carp angler try to claim 27lb for a fish that was clearly nowhere near that weight. He took some convincing that the pointer had only gone once around the dial and it actually weighed 17 pounds. 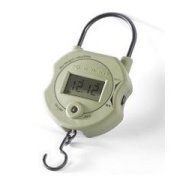 Digital Scales are another option with a huge variety available, though not all of them are designed with anglers in mind. Be careful when selecting digital scales that they measure in small increments, preferably 1oz (25 grammes). Some of the models are only accurate to half a pound. Remember to keep a spare set of batteries. You wouldn’t want to catch that fish of a lifetime to find that your batteries are dead and you can’t weigh it. 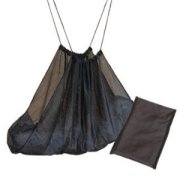 If you have a pair of scales you will need a Weigh Sling too.

Some anglers may elect to use the landing net; however, this may not be very practical. The handle must be removed first. Also, if a treble is snagged in the mesh it will need to be removed and this will cause a delay that could harm the pike.

Make sure you thoroughly wet the sling before wrapping it around a fish as you don’t want to remove any of the protective slime. Weigh slings are fairly cheap and are compact when folded. Always dry the sling at the end of a session.

As mentioned earlier, there are some excellent unhooking mats that are designed so the fish can be weighed in the mat. These could be a better option than buying the two products separately.

To glove or not to glove; that is the question. Which camp are you in?

Some anglers swear by using a glove. Others bear the scars of battle. A chainlink glove like the E.T. Unhooking Glove is a sensible addition to any piker’s tackle bag. This glove comes in one size and can be worn on either hand.

So many pike are caught before dawn or immediately after dusk that a torch is a vital part of your unhooking gear. But there are lots more times when a torch is needed that you should not go fishing without one. From safely walking down the bank to tackling up prior to casting in. Right through to packing away in the dark and checking that you haven’t left anything on the bank or next to the car.

Choose a reliable and powerful torch such as the Maglite and keep a spare set of batteries in your bag. The Maglites slim round profile make them easy to fit into your mouth if you forget to bring your head torch too.

Even if you don’t intend fishing into dark, the chances are, at some point you will get a run as the light fades.

A head torch will be a life saver when you are trying to unhook a pike in the dark; for you and for the pike. Keeping two hands free is vital when unhooking a pike.

In recent years the choice and quality of torches has improved as the super bright led lights have emerged. A head torch such as the Ring Cyba-Lite Sprint Led Headlight with an elastic strap that wraps around your head will make an excellent tool for unhooking pike in the dark.

I also like the look of the newer models that clip onto your cap. Great if you wear a cap!

Perhaps the most important tool in your kitbag is confidence. Don’t be afraid of the pike.

With pike on its back take a firm hold of the gill plate and lift the head off the ground. The jaw will drop open and you can get the forceps in and the hooks out.

Search on You Tube and watch some of the many videos to get a good idea of how approach unhooking pike.

Links on this page that help PikeAngler.co.uk

Other links on this page